In proton radiotherapy, the dosimetry protocol TRS-398 does not provide the beam quality correction factors kQ;Q0 for all areas of the spread out Bragg peak (SOBP). Monte Carlo simulations using the TOPAS simulation toolkit were performed to calculate the beam quality correction factors at various depths of the SOBP to observe any variations. The SOBP of the generated proton beam had a range of 15 cm and a width of 15 cm. The beam quality correction factors kQ;Q0 were calculated not only at the reference depth of 7.5 g/cm2 recommended by TRS-398 but also at depths of 4 g/cm2 and 13 g/cm2. The comparison of the simulation results for the absorbed dose with actual measurements showed a slight difference at the surface above the water phantom, but the width of the SOBP was well matched with a difference of less than 1%. The kQ;Q0 factor calculated at the reference depth of 7.5 g/cm2 was 1.045, which is within the error range of the value of 1.030 provided by the TRS-398 protocol. The kQ;Q0 factors calculated at the depths of 4 g/cm2 and 13 g/cm2 were 1.041 and 1.048, respectively. While all the calculated values were within the error range of the value suggested by TRS-398, the observed increase in the kQ;Q0 factor with increasing depth suggests that a position-dependent beam quality correction factor determined through precise measurements may be required to calculate the correct dose.

The dosimetry protocol TRS-398 developed by the International Atomic Energy Agency (IAEA) presents a protocol to measure absorbed doses of external radiation [1]. Absorbed doses are measured by using an ionization chamber placed inside a water phantom, with the ionization chamber being periodically calibrated to determine the correct absorbed dose. Most ionization chambers are calibrated based on 60Co gamma rays, but since patient treatments actually use radiation of various particles and energies, a correction compensating for the difference in beam quality is required. TRS-398 proposes a correction factor 0 to correct for this difference in beam quality.

Among the radiation used for patient treatment, the physical characteristic of a single-energy proton beam is an energy peak that is generated by transferring a large amount of energy at the end of the range, which is called a Bragg peak. In addition, the Spread Out Bragg Peak (SOBP), which is made by the superposition of proton beams of various energies, can irradiate radiation uniformly to the target volume. Due to these physical characteristics, the proton beam can focus radiation on the target and minimize damage to surrounding normal tissues compared to treatments using gamma and electron beams.

The beam quality correction factor 0 is a factor correcting for the difference in effect between the reference beam quality 0 used to calibrate the chamber and the user beam quality used for actual treatment. Under the conditions in which the Bragg-Gray capacity theory is applied, the calculation of the 0 factor is as follows [1].


Here, is the stopping-power ratio of water and air, is the overall perturbation factor for the ionization chamber, and is the average energy that generates ion pairs in air for each beam quality. Instead of calculating separately the factors and , it has been proposed to calculate the 0 factor in a more direct way by using Monte Carlo simulations as follows [6,7].


The ch factor, which depends on the chamber and the beam quality, is the ratio between the absorbed dose () for water at the reference point in the absence of the chamber and the average absorbed dose for air in an air-filled cavity. In this study, in order to calculate the beam quality correction factor 0 , the dose values () and were calculated for both the reference beam quality 0 (60Co) and the user beam quality (protons) by using Monte Carlo simulations. For , we simply used the known values of 33.97 eV and 34.44 eV for 60Co and for protons, respectively [8].

In order to calculate the beam quality correction factor, the geometries of the ionization chamber and of the point volume are required to determine and (), respectively. The geometry of the PTW30013 farmer chamber was implemented in the simulation. The point volume used to calculate () is a disk with a diameter of 10 mm and a thickness of 2 mm. Fig. 1 shows the geometries of the point volume and ionization chamber. For the densities of the PMMA and graphite inside the ionization chamber, one should refer to the manufacturer’s blueprint [10]. For the densities of water, air, and aluminum, and the I-value of all materials, the information described in ICRU-90 was used [8]. I-values and density values of the materials are given in Table 1.

Table 1 . The density and average excitation energy of the materials used in the simulation.

Figure 1. (Color online) (a) The point volume used for the calculation of () is a disk filled with water with a thickness of 2 mm and a diameter of 10 mm. (b) The geometry of the PTW30013 farmer chamber used for the calculation of . From outermost to innermost, the different parts composing the PTW30013 farmer chamber are PMMA (in green), graphite (in red), air-filled cavity (in black), and aluminum (in yellow). 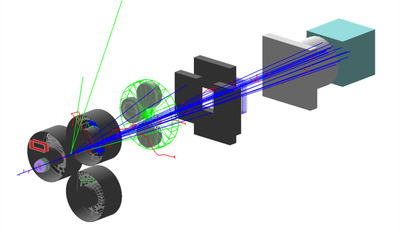 The parameter that controls the step size corresponds to the maximum ratio of the step size to the particle range. The parameter sets the minimum step size at which particles are absorbed. Thus, as the particle progresses and energy decreases, the step size decreases until the particle range becomes smaller than the . In this study, is set to 0.05 and is set to 100 nm [12]. In the Monte Carlo simulations, secondary particles with a continuous slowing down approximation range (CSDA) lower than the production cut are absorbed in place. The production cut for the region of interest (ROI) including the reference volume and ionization chamber was set to 1 µm for all particles, and to 500 µm elsewhere [13].

Fig. 3 presents a graph comparing the simulation results with experimental measurement results of percent depth dose (PDD) to check whether the proton beam is generated well as intended. In the case of the simulation, the absorbed dose was measured by placing a voxel of 0.5 × 0.5 × 0.5 mm3 on the water phantom. For the experimental measurement, IBA Zebra was used to measure the proton beam at NCC. IBA Zebra measured the absorbed dose using vented ionization chambers spaced 2 mm apart [14]. The results from the simulations and the experiment show a slight difference in the absorbed dose on the surface of the water phantom, but the width of SOBP is about 1% different, with TOPAS and IBA Zebra presenting values of 14.9 g/cm2 and 15.0 g/cm2, respectively. 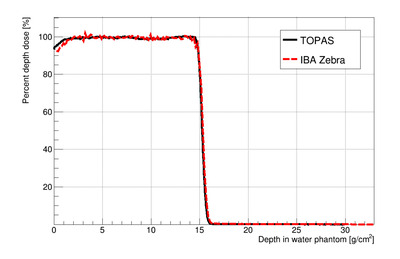 Figure 3. (Color online) Comparison of measurement results of percent depth dose between Monte Carlo simulations and experiment with an actual beam, for a proton beam modulated with an SOBP width of 15 cm and a range of 15 cm. The experiment measurements were made using IBA Zebra. Both results were normalized based on the absorbed dose at 7.5 g/cm2. 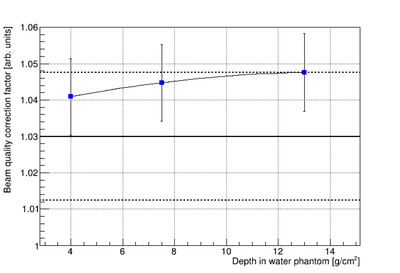 Figure 4. (Color online) Monte Carlo simulation results of beam quality correction factor for the PTW30013 farmer chamber. The error bars represent the standard deviation, which is around 1%. The solid line at 1.030 is the 0 factor at the reference depth provided by TRS-398, and the dotted line shows the corresponding standard uncertainty of 1.7%.

In this study, the proton beam nozzle of NCC was simulated using the Geant4-based Monte Carlo simulation toolkit TOPAS to generate a proton beam and calculate the beam quality correction factor 0 of the ionization chamber for various positions in the SOBP of the proton beam. In order to observe the variation of the beam quality correction factor in the SOBP, it was calculated at the depths of 4 g/cm2 and 13 g/cm2, along with the reference depth of 7.5 g/cm2 suggested by TRS-398. While all the values calculated in this study are within the error range of the value provided by the TRS-398 protocol, the simulation results show that the beam quality correction factor increases gradually with the depth, and thus a position-dependent correction factor may be required for the SOBP. In order to verify the Monte Carlo simulation results of this study, it is necessary to conduct a precise experiment using a calorimeter that can measure the absolute dose. In addition, while this study was conducted for one particular ionization chamber, further studies using other ionization chambers and beam conditions are required.

This work was supported by a National Research Foundation of Korea (NRF) grant funded by the Korean government, Ministry of Science, ICT and Future Planning (MSIP) (NRF-2019R1F1A1060665), and was also supported by the Korea Research Institute of Standards and Science (KRISS), the research program of “Proton beam (double scattered) water absorbed dose precision measurement technology development”.