Silicon nanowires (Si NWs) have attracted much attention due to the high potential for their applications to multifunctional devices such as transistors, photodetectors, memories, and processors [1–6]. To achieve this goal, it is important to clearly define a structure of Si NWs. In particular, the surface structure of Si NWs significantly affects an electrical and thermal properties [7]. To prepare high-quality Si NWs, metal-assisted etching (MaE) is widely studied, which is the etching method using noble metal catalysts and chemical solutions [8–10]. Recently, Yang . showed the controllable electrical and thermal conductivities of porous Si NWs can be utilized as a building block of thermoelectric devices [11]. S. J. Rezvani . and Y. Qu . show that an electrical conductivity of porous Si NW is much lower than that of conventional Si NW with a smooth surface. [12,13]. In addition, J. M. Weisse shows that a thermal conductivity of Si NW is negatively proportional to a porosity [14]. Here, I investigate the effect of noble metal structure on the silicon nanowire surface. Two Au meshes are prepared by different patterning methods. One is the usage of an anodic aluminum oxide (AAO) disk as a patterning template. The other is the patterning using polystyrene (PS) nanospheres. Two kinds of silicon nanowires fabricated by MaE using each Au mesh show different surface structures.

The Au mesh with holes were prepared by two different methods. First, the AAO disk is prepared as a patterning template (Fig.1) [15]. The AAO disk has long channels with a hexagonal alignment from a pore mouth to a back side. Then both side can be used to pattern the Au mesh. The Au of 50 nm is deposited on the AAO disk by metal sputtering. Then the AAO is selectively dissolved on KOH for 5 minutes. Then the Au mesh is floated on KOH, and subsequently KOH is replaced to DI-water. To remove Au particles on the back side of Au mesh, the Au film is transferred to aqua regia (HCl/HNO3 = 3:1) for 5 s. The Au mesh is transferred to Di-water to clean the backside again, then the Au mesh is finally transferred to moderated-doped Si wafer. 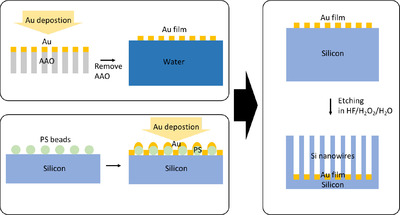 Figure 1. (Color online) Schematic illustration to show the fabrication processes of Au meshes using AAO and PS beads. Au meshes are utilized as catalyst of MaE to etch down the Si, resulting in the formation of Si NWs. 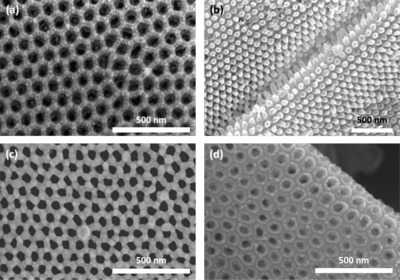 The fabrication process using PS beads is investigated by SEM. The PS beads on the Si wafer are closely packed each other and form the monolayer (Fig. 3a). After the O2 plasma treatment, the diameter of PS beads is reduced as half of the original diameter (Fig. 3b). The surface of reduced PS beads is quite rough because of hardening by O2 plasma. The Au film of 50 nm is deposited onto the prepared sample by metal sputtering (Fig. 3c). To generate the Au mesh, the Au cup/PS bead arrays are dissolved by acetone. The remained Au structure on the Si wafer is the mesh with hole arrays (Fig. 3d). There are many residues around the holes, which may metal nano particles or polymer particles. Even though the the edge structure of hole is more circular than that of the Au mesh from AAO, there are many cracks around the hole, which reflects the rough surface of O2 plasma treated PS beads. 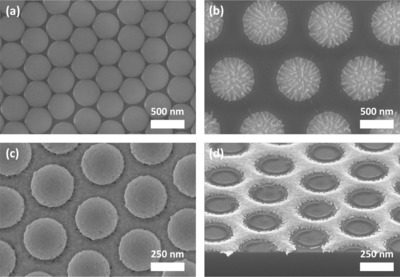 Two kinds of Si NW arrays are fabricated by MaE using each prepared Au mesh. The Au mesh loaded Si wafer is dipped in HF/H2O2/H2O. In MaE, the Si surface underneath the Au is oxidized because the Au extracts electrons from the Si surface, then consuming H2O2. Then oxidized Si surface is dissolved in the solution by HF. The cyclic reaction gives the result of the etching of Si surface down, generating Si NWs through the holes of Au mesh. As a result, vertically aligned Si NW arrays are generated from both samples (Fig. 4a and c). The high-resolution SEM images show the details of Si NW surfaces (Fig. 4b and d). In the case of Si NWs fabricated by using the Au mesh from AAO, the surface of NW is extremely smooth. It is hard to observe a roughness of surface in the SEM image. On the other hand, the Si NW fabricated by using the Au mesh from PS beads show the quite rough surface. In particular, there are striped vertical lines on the surface of Si NWs. On the contrary, the Si wafer under the Au mesh shows very smooth surface where is not etched during MaE. According to the mechanism of MaE, the Si wafer is etched down with the exact same shape of the Au mesh. Then the cracked hole structure of Au mesh makes the striped lines on the Si NW surface. Two kinds of Si NWs have different diameters, however it seems that there is no correlation between the diameter and surface structures. The hole shape dominantly affects the Si NW surface structure. This result suggests that the structure of noble metal as catalyst in MaE is important to prepare a high quality Si NWs with a smooth surface. 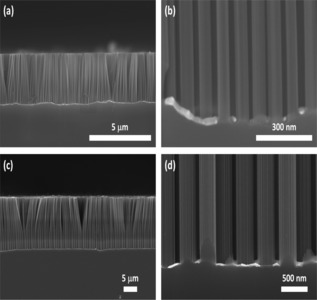 In this work, I demonstrated the fabrication of two kinds of Si NWs by MaE using two Au meshes that are prepared by different methods. One is the usage of AAO disk as a patterning template, and the other is the patterning method using aligned PS bead arrays as a patterning mask. The Au mesh from AAO shows very clean hole structures without any other nano particles, however the Au mesh from PS beads shows the holes with the cracked edge structure and residues. The MaE using the Au mesh from AAO enables to prepare Si NWs with the extremely smooth surface, while the Si NWs fabricated by MaE using the Au mesh from PS beads has the quite rough surface with stripped vertical lines. I believe that the MaE using catalyst with well-defined structure is important to fabricate high-quality Si NWs, and it will be helpful to secure high electrical and thermal conductivities of Si NWs.

This work was supported by the research grant of Jeju National University in 2021.