Neutron skin thicknesses () of atomic nuclei 48Ca, 132Sn, and 208Pb are considered in the Korea-IBS-Daegu-SKKU (KIDS) density functional formalism. The most relevant model parameters to are constrained from standard nuclear data and neutron star properties determined from modern observations. mean values for the models satisfying both nuclear and astronomical data are obtained as 0.161, 0.220, and 0.160~fm for 48Ca, 132Sn, and 208Pb, respectively, and the corresponding standard deviations are 0.011, 0.020 and 0.021~fm. Correlations between the of the three nuclei are estimated. We obtain a correlation coefficient of 0.978 between of 48Ca and 208Pb, and 0.996 between of 132Sn and 208Pb.

The equation of state (EoS) of infinite nuclear matter is commonly parametrized in terms of parameters 0, , , and sym over a density range accessible in laboratory experiments and observations of compact objects in the universe. These parameters are defined in the energy per nucleon in the nuclear matter as follows:


where and . and are the neutron and proton densities, respectively, is the baryon density ( in the nucleon matter), and 0 is the nuclear saturation density. In nature, it is frequent to have at densities below and above 0, where the roles of 0, and sym become important. Neutron skin thickness of neutron-rich nuclei, and the neutron star EoS are representative examples that highlight the roles of and sym. Precise determination of the EoS parameters 0, , , sym is a prerequisite requirement for the correct description of nuclear structure at and the EoS of nuclear matter at where is substantially away from 0,

Recently[1], to minimize the uncertainties of the EoS parameters, the parameter space (0, , , sym) was surveyed over the ranges presented in the literature , , , and in units of MeV. is defined as . Dividing the interval of each parameter by 5, 0.5, 5 and 20 MeV for 0, , , and respectively, the number of EoS considered initially is 4410. Each energy density functional (EDF) is transformed into a Skyrme-type force. Skyrme force has two constants absent in the nuclear matter EDF, the coefficients of and spin-orbit terms. The two constants are fit to 13 nuclear data using a standard Skyrme-Hartree-Fock code with BCS approximation, the energy and radius of 16O, 40Ca, 48Ca, 90Zr, 132Sn, and 208Pb, and the energy of 218U. With the 4410 Skyrme force models fit to 13 nuclear data, the accuracy of a model is measured in terms of the average deviation per datum (ADPD)

This study investigates the neutron skin thickness, , of 48Ca, 132Sn, and 208Pb with ADPD03 and R14 sets. For 48Ca and 208Pb, accurate measurements were performed in recent experiments. PREX Collaboration reported the first stage measurement (PREX-I) = 0.15 — 0.49 fm[2]. The accuracy was improved in an upgraded second stage experiment, (PREX-II) = 0.212 — 0.354 fm[3]. Indirect determination is also accessible by measuring the 1 polarizability, , and pygmy dipole resonance of the nuclei. Measurement of at RCNP reports 0.135 — 0.181 fm[4], and the pygmy resonance experiment gives 0.20 — 0.28 fm[5]. The measurement of was also applied to 48Ca, and the result is obtained as — 0.20 fm[6]. A recent experiment at RIKEN performed the scattering of 48Ca on the C target, and extracted a result fm[7]. Measurement of in the parity-violating electron scattering was performed at JLab by the CREX Collaboration. They announced “thin skin” of 48Ca in the press release, and the numerical results are expected to be available soon. It was shown that is correlated linearly with [8]. Correlations between 's of different nuclei provide useful criteria for investigating the consistency of theoretical predictions and measurements from experiments. The proposal for measuring by the R3B Collaboration at FAIR motivates the calculation of .

Table 1 summarizes the mean and standard deviation of the EoS parameters 0, , , and sym for the ADPD03 and R14 sets. Isoscalar and isovector effective masses at the saturation density are shown in terms of the ratio to free mass and . Reference[1] shows that the correlation of 0 and with 1.4 is 0.24 and 0.22, respectively, in the extended R14 (eR14) set. The slight differences in the mean and standard deviation of 0 and between the ADPD03 and R14 sets could be due to this weak correlation. The result demonstrates that the data of extremely neutron-rich systems or phenomena are not necessary to accurately determine 0 and .

Table 1 . Mean and standard deviation (s.d.) of EoS parameters 0, , , and sym in the unit of MeV, and the isoscalar and isovector effective masses to the nucleon mass in the free state and from the 358 models in the ADPD03 set and the 158 models in the R14 set.

Parameters and sym, unlike 0 and , exhibit substantial relocation of the mean value and reduction in the standard deviation when the 1.4 constraint is applied. This dramatic change in and sym from the ADPD03 set to the R14 set could also be understood in terms of the correlation with 1.4. Because correlation coefficients of and sym with 1.4 are 0.79 and 0.90 in the eR14 sets, respectively, significant changes occur in and sym when the constraint of 1.4 is considered.

and can be assumed to take specific values within the KIDS formalism without affecting the nuclear matter properties at saturation density and the basic properties of the nuclei[10]. However, because we do not assume specific values for and in this work, they are obtained as results of fitting to 13 nuclear data. The results in Table 1 show that and are weakly dependent on the model set. In recent studies[11, 12], and values are probed in the electron-nucleus scattering in the quasielastic region. Values considered in Ref.[11, 12] are (1.0, 0.8), (0.7, 0.7), (0.9, 0.9). It is shown that the dependence on the effective mass appears evident for the response function in the exclusive scattering on 16O[11] and the cross section in the inclusive scattering on 12C and 40Ca[12]. Theoretical investigation shows better agreement with data with close to 1. Models in the ADPD03 and R14 sets show that the effective mass is consistent with the quasielastic electron scattering data. Table 2 summarizes the results of the neutron skin thickness of 48Ca, 132Sn, and 208Pb from the ADPD03 and R14 sets. The mean values and standard deviations of the R14 set are similar to those of the ADPD03 set. The correlation of with 1.4 is -0.02 in the ADPD03 set and 0.09 in the eR14 set[1], implying that the determination of is seldom influenced by the inclusion or omission of the 1.4 constraint. The result demonstrates that such insensitivity is not limited to 208Pb, but is valid globally from light to heavy nuclei.

Table 2 . Mean, standard deviation, minimum and maximum values of the neutron thickness of 48Ca, 132Sn, and 208Pb obtained from the ADPD03 and R14 sets.

Because the results of the CREX experiment are expected to be reported in near future, it is worthwhile to refer to theoretical predictions of in the literature. We summarize the result of three studies. In Ref.[8], of 48Ca, 132Sn, and 208Pb are calculated from the correlation between and using 48 nuclear energy density functionals. 25 models that satisfy the data of at RCNP were sorted out among the 48 mdoels. The resulting 25 models give , , and fm for , , and , respectively. The center value and uncertainty of are noticeably larger than that of our result. Alternatively, our results for the mean values of and are smaller than the results in Ref.[8], but a major portion of the ranges is shared by our result and that of Ref.[8].

Another interesting theoretical study is the coupled-cluster calculation with the nuclear potential obtained from low-energy effective field theory (EFT)[14]. The EFT is a qualified tool for describing few-nucleon systems. The method is extended to the calculation of , and the result is obtained as — 0.15 fm. The uppermost part of the range is consistent with our result, but there is no overalp with the result of Ref.[8].

The third reference for the theoretical study is Ref.[15], in which ranges of and are inferred from the Bayesian method using the data of of Sn isotopes and the neutron star properties. It is concluded that must be larger than 0.15 fm and smaller than 0.25 fm to be compatible with the Sn and neutron star data. Uncertainty is broad, but the work provides a lower limit on . Correlations between the EoS parameters, EoS parameters and observables, and observables have been studied extensively in many works. The left section of Table 3 shows the correlation of with the EoS parameters and for the R14 set. The slope of the symmetry energy, , shows the strongest correlation with among the EoS parameters. This result is consistent with the previous findings that is most strongly correlated with . The EoS parameter most uncorrelated with is sym. It has been discussed that 0 and are relevant with to nuclear properties such as mass and radius. Therefore, accurate measurements of will be a promising way to accurately determine .

Table 3 . Left section: Correlation coefficients for , , , sym and from the R14 set. Right section: Linear approximation (LA) of and as a function of , and their ranges obtained by subsitituing the data of in the linear function. 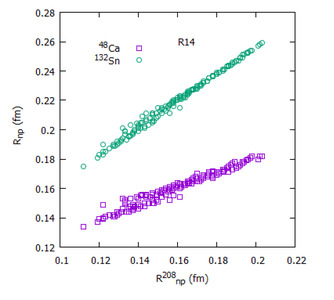 In the right section of Table 3, linear approximations of and are given as functions of in the column denoted by “LA”. The next column titled “PREX-I" shows the range of and by substituting the PREX-I data of in the linearly approximated functions of and . Columns for “PREX-II” and “" are obtained in the same way. The ranges of neutron skin thickness of 48Ca and 132Sn can be predicted if a measurement of is correct. Since the PREX-II data of are incompatible with those of , there is no overlap in the ranges of (and ) obtained from PREX-II and .

We calculated the neutron skin thicknesses of 48Ca, 132Sn and 208Pb with the models constrained by accurate reproduction of nuclear data and the radius of mass neutron stars determined from astronomical observations. The set of models determined from the nuclear data constitute 385 combinations of the EoS parameters (0, , , sym), and the neutron star radius constraints select 158 models from the 358 models. The mean and standard deviation of , , and are not significantly different between the two sets, and are consistent with the results of other theories. Result of is compatible with the range determined from an electric dipole polarizability experiment; however, there is no value common with the result of the PREX-II experiment.

Correlations between , and are calculated using the 158 models, and the results are extremely close to 1. From the linear approximation of and as functions of , we obtained the ranges of and corresponding to the data of from PREX-I, PREX-II, and electric dipole polarizability. The ranges corresponding to PREX-II are incompatible with those obtained from the electric dipole polarizability data. result from the CREX Collaboration, and measurement of in the R3B Collaboration are expected to shed light on resolving the uncertainty and inconsistency

This work was supported by the National Research Foundation of Korea (NRF) grant funded by the Korea govenment (No. 2020R1F1A1052495).

1In Ref.[1], round off is applied to 1.4, so the actual range is km. In this work, we do not use round off, so the models are selected for km. Therefore, the number of models in the eR14 set is slightly larger than the R14 set.