In this research, a photonic crystal for dielectric laser accelerator has been designed and analyzed by conducting finite-domain-time-differential (FDTD) simulations. The photonic crystal of dielectric materials, such as Si or SiO2, can confine electric field components of a laser pulse in space when it is designed as a cavity structure. The longitudinal electric field components can serve as a driving force for electrons. A maximum acceleration gradient is expected when the electron and acceleration field phases are matched. The phase matching can be achieved by tilting the front of the input laser pulse. In this study, a combined structure of a micro-scale prism and periodic cavities was considered to tilt the pulse front. The calculation of the acceleration field by FDTD simulations can give an energy gain of the incident electrons in dielectric laser acceleration (DLA).

Dielectric laser acceleration (DLA) is one of the ambitious approaches to achieve higher acceleration gradients in accelerators[3-5]. In DLA, for example, a photonic crystal can be used to generate a very high accelerating field with a laser pulse if the laser pulse is injected into the photonic crystal. In this case, the phase matching between the electrons and the accelerating field is very important, and there are several ways to do it. One of the ways is using on-chip phase shifters[6]. However, their structure is very complicated and may lead to a severe beam loss in acceleration. Instead of this method, the phase matching can also be achieved by pulse front tilt of the injected laser in a simpler structure. Some studies have been conducted using this method with spatial and temporal laser chirp with external diffraction gratings[7,8]. However, we achieved the phase matching with pulse-front-tilt (PFT) using micro-scale prisms and periodic cavity without external diffraction gratings. Thus, we achieved an average acceleration field of 0.28 GV/m with the structure we have designed. The details are described in this paper.


where is the radiation wavelength, Λ is the grating period, is the reflection order from the grating, , and are the electron and light velocities, respectively. The Smith-Purcell effect is basically a kind of Cherenkov radiation, but no threshold velocity for electrons is required, unlike the Cherenkov radiation.

On the other hand, the inverse Smith-Purcell effect is the process in which an electromagnetic wave diffracted by the grating accelerates electrons. Early studies show that DLA with laminar-type holographic gratings can match the situation[10,11,12]. In this process, phase matching is one of the important concepts in DLA, which is crucial for gaining a high acceleration gradient. If a laser pulse is injected into the DLA structure with a tilted pulse front, it will generate a traveling electromagnetic wave in the longitudinal direction and can accelerate the injected electrons continuously, leading to a high energy gain. Here, the phase of the accelerating field by the input laser pulse is described by


where is the DLA structure period and is the input laser wavelength. In the case of laser injection with a tilted pulse front, the phase matching condition in Eq. (3) should be adjusted depending on the tilt angle. 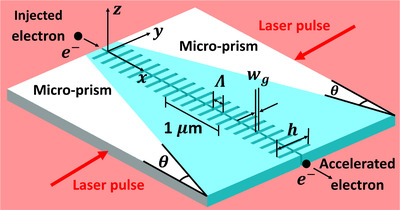 Figure 1. (Color online) Schematic of the symmetric DLA structure. DLA acceleration cavities are placed with micro-prisms from both sides, where the input laser pulses are injected from both top and bottom directions. In the figures, is the cavity height, is a prism angle of the micro prism, Λ is a period of the acceleration cavities, is a gap in the acceleration channel, and the injected electrons are accelerated to the positive -direction. The material of the substrate colored with red and the material of the cavity colored with cyan are Si. The micro-prism colored with white consists of SiO2.

Here, we introduce a new component for DLA called a micro-prism. The micro-prism is a micro-scale right-angle prism fabricated with a lower refractive index than that of Si, for example, SiO2. The injected laser's wavevector can be tilted by the micro-prism, and the laser beamlets arrive at the channel at different times. The longitudinal accelerating field was calculated by simulations, and the results are shown in Fig. 2. As shown in the figures, the phase of the longitudinal electric field travels to the positive -direction as time goes on, which is due to the micro-prism angle . The traveling electric field can accelerate electrons to high energies in the acceleration channel. 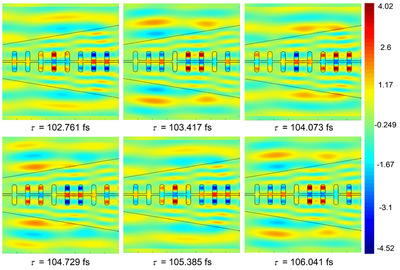 Figure 2. (Color online) Simulation results for the normalized longitudinal accelerating field /0. The on-axis accelerating field is traveling along the acceleration channel as the time evolves. The simulations were conducted with 90 fs of the offset time. In these simulations, the input laser beam is polarized in the -direction, its wavelength is 800 nm (Ti:sapphire laser), and the laser intensity is 0 = 1.3 × 1011 W/cm2.

We also calculated the energy gain of an electron which is injected with an energy of 30 keV when the input laser intensity is 0 = 1.3 × 1011 W/cm2. For the calculations, we made our own code using MATLAB to describe the equation of motion for a single electron. Figure 3(a) and (b) show the calculated electric fields in the acceleration channel, where is the longitudinal field, and are transverse fields, and 0 is the input laser field. As shown in Fig. 3(a), transverse electric fields are significant if a laser pulse is injected from only one side, while the transverse fields are greatly reduced if two laser pulses are injected from both sides, as shown in Fig. 3(b). In the case of Fig. 3(b), the longitudinal field strength is much higher than that of the transverse fields. 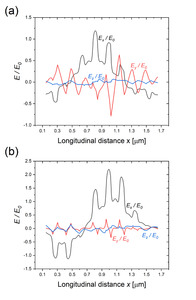 Figure 3. (Color online) Normalized electric field components in the DLA cavities for Fig. 1(a) and Fig. 1(b), respectively. 0 is the maximum electric field of the input laser pulse.

We also investigated the effect of the cavity height in the DLA structure. The peak longitudinal electric field is shown in Fig. 4(a). The result shows that the longitudinal field is generally reduced as the cavity height increases. At some heights, however, the longitudinal field has a peak. This can be explained by the fact that two counter-propagating laser pulses from both sides are overlapped inside the channel and cavities, leading to a stronger longitudinal acceleration field. A detailed process for this phenomenon is shown in the previous figure (Fig. 2). We also calculated the average acceleration gradient over the entire acceleration distance in the DLA structure, as shown in Fig. 4(b). The result also indicates that a special strong longitudinal gradient can be obtained for a specific cavity height. 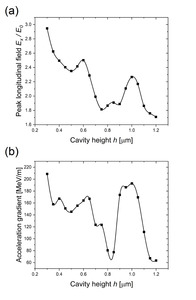 The prism angle can affect the average acceleration gradient in the DLA structure, and its calculation result is shown in Fig. 5. Here, the laser intensity of 0 = 1.3 × 1011 W/cm2 and the cavity height μm. As expected, the average acceleration gradient increases as the tilt angle increases, but there is an optimum angle. According to our calculations, the optimum angle is approximately 16.7°, as Fig. 5 shows. 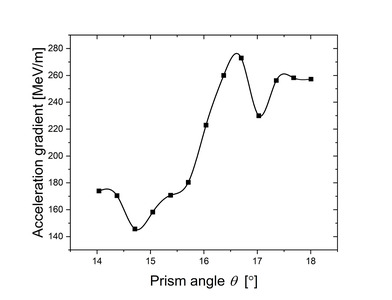 Based on the FDTD simulation results, we have designed an experimental setup for DLA. Fabrication of the DLA nanostructure is the most critical part in this experiment. It will be fabricated through a subtractive etching process on a silicon-on-insulator (SOI) wafer for the Si nanostructure and an additive process for the micro-prism. As the resolution of the structure is very high, the electron-beam (E-beam) lithography technique will be used for the subtractive process. The fabricated Si structure will serve as the periodic cavities and the acceleration channel. The additive process, on the other hand, will be done by atomic layer deposition (ALD)[15] or liquid phase deposition (LPD)[16]. The micro-prism will be made by SiO2 through those processes.

For the experiment, we will use the 35 fs Ti:sapphire laser in our laboratory, which consists of a mode-locked Ti:sapphire oscillator, a Ti:sapphire regenerative amplifier, a pre-amplifier, and a pulse compressor in air. As Fig. 6 shows, the laser beam pulse will be divided into two pulses first, and then they will be injected into the DLA structure from both sides. Therefore, a strong longitudinal electric field is expected in the acceleration channel in the DLA. In this process, the focused laser spot size will be adjusted to have a maximum acceleration field, which will be higher than the injected laser field strength of 0 = V/m. The accelerated electrons will be injected to the magnetic spectrometer, yielding the electron beam energy and energy spread. 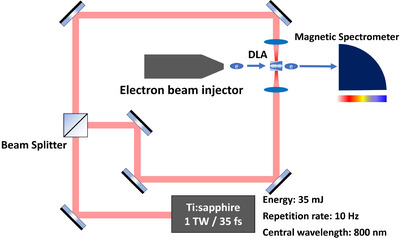 Figure 6. (Color online) Schematic of the DLA experimental setup. The laser pulse from the 1 TW/35 fs laser system is divided into two pulses, and they will be injected into the DLA structure from both sides.

The research was initiated at Nano Photonics Laboratory, Konkuk University, and completed at Gwangju Institute of Science and Technology (grant number: NRF-2022R1A2C3013359).