Herein, we proved the equivalence of the formulas for the magnetic force and torque between magnetic dipoles derived from the Lorentz force, the gradient of the magnetic potential, and the derivative of the mutual inductance. In a current flowing system, such as two circular loops with diﬀerent diameters, we calculated the magnetic force and torque to demonstrate the equivalence of the formulas using the Lorentz force, magnetic potential energy, and mutual inductance.


Moreover, because the magnetic force is a conservative force, a method for obtaining this force using the gradient of the magnetic potential energy is proposed[8,9].


Furthermore, the concepts of virtual work and displacement have been introduced into electromagnetics and used to calculate the magnetic force and torque[5,10]. The magnetic force between currents and flowing through two coils along the -axis is calculated as the derivative of the mutual inductance [1,4,11]:


The magnetic force and torque, which act on coils in a magnetic field, are sufficient to attract students’ attention. Thus, conducting experiments on them and comparing the experimental and theoretical values will be worthwhile. However, the magnetic force equations (Eqs. (1)–(3)) in the above three methods can be complex for college students because they exhibit different forms and likely originate from different physical concepts. Therefore, for students to understand, it is necessary to show that Eqs. (1)–(3) are the same expressions. Furthermore, the three equations can be used to express the magnetic torque , they are all equal. Many college textbooks cover and , but they never explain the equivalence between the expressions. Only in a textbook is the equivalence of Eqs. (1) and (3) introduced without any arguments about the equivalence of [5].

In this study, the magnetic force equations (Eqs. (1)–(3)) are shown to be equivalent. Additionally, the magnetic force and torque equations derived in a previous study[10,11] contain elliptic integrals of the first and second types, which are complicated. Thus, by assuming a “special case,” we attempted to prove their equivalence by obtaining an analytic function that college-level students can use. The analytical function comprised only the elementary functions of the magnetic force and torque. Here, the “special case” implies that “a system composed of a circular coil with a large diameter and a circular coil with a small diameter was coaxial, and one coil was inclined at a small angle.” This is an approximate condition used in this study. As argued in Sec. III, in such a special case, the available formulas for magnetic fields of coils are known within the approximate limitations without counting on the elliptic functions[13].


where is the generalized force, which is given by


and is the potential energy. If in Eq. (5) is a coordinate that determines the distance traveled in a certain direction, Eq. (5) is expressed as


where is the force. Furthermore, if is a coordinate that determines the rotation angle along a certain axis, Eq. (5) is expressed as 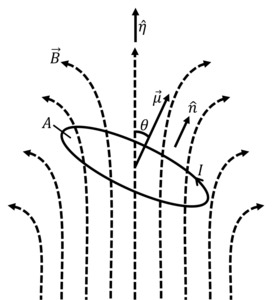 Note that Eqs. (13) and (14) can be used for all magnetic dipoles with the magnetic moment , irrespective of the size and shape of the current loops[9].

For flowing in a planar coil of area , ( is the unit vector of ) and the magnetic flux . Thus,


If there are two coils and is formed by the current of one coil, the mutual inductance of the other coil is defined as . Thus, Eqs. (16) and (17) can be expressed as

Considering that the positions of two coils change by and ,resulting in only a change in , while and flowing through the two coils remain constant after the change in positions, Eqs. (18) and (19) are given by

Equations (22) and (23) are also beneficial because and are related to the derivation of only Φ; they indicate that the magnetic force and torque exist when there is a change in the or direction of the magnetic flux Φ.

Meanwhile, the Lorentz force acting on the conducting wire through which the current in the magnetic field flows can be expressed using Eq. (1):


We use Eq. (22) to demonstrate its equivalence with Eq. (24). As shown in Fig. 2, when a magnetic dipole, such as a current coil, is placed in a magnetic field, the magnetic force and torque act simultaneously if the directions of and differ. 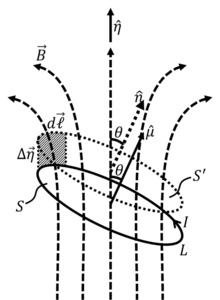 Figure 2. Virtual displacement of the current coil in a nonuniform magnetic field .

Similarly, we attempt to derive

As shown in Fig. 3, when the virtual angular displacement is set as , the magnetic flux passing through the area, , can be expressed as 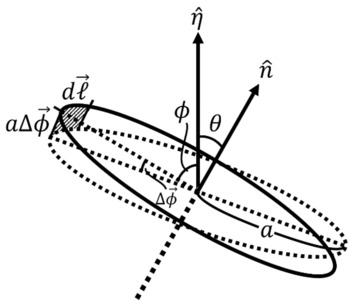 Figure 3. Virtual displacement related to the rotation of the current coil in a nonuniform magnetic field .

III. Magnetic force and torque between two circular coils 1 and 2

We demonstrated that, despite being equal, the relational expressions for the forces and torques acting on the magnetic dipole in a nonuniform magnetic field exhibit different expressions. For example, we introduced the equality of force and torque acting on each current flowing through circular coils 1 and 2, which were derived from the magnetic potential energy, mutual inductance, and the Lorentz force.

For calculation simplicity, we considered the case where one coil (1) has a larger diameter than the other coil (2) and the angle by which one coil is inclined to the central axis is small, while the distance between the two coils is large. Here, the magnetic flux passing through 2 due to the magnetic field generated by 1 was governed by rather than [13]. Moreover, the change in the radial direction of was negligible and can be to on the central axis. In other words, the change in the radial direction of the magnetic field and the deviation in both sides of the coil due to the size of 2 were not considered. The effect on the size of 2 will be introduced during the experiments in subsequent studies. As shown in Fig. 4, when 2 is small and far from generated by flowing through 1 is expressed along the -axis: 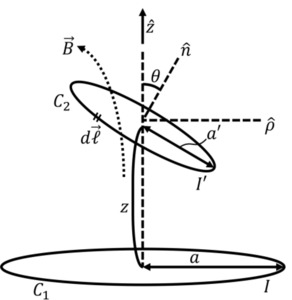 Figure 4. Two circular coils through which the current flows. The current is located far from the current , and it is inclined by a small angle with respect to the central axis .

Note that in Eq. (34) is not the magnetic field of the ideal magnetic dipole because it depends on the denominator. Because a magnetic dipole, such as the current loop, has a finite radius , Eq. (34) yields a more precise . Equation (34) can be used in Eq. (13) in this case.

The magnetic flux Φ of 2 by is expressed as


Using Eqs. (20) and (21), the force and torque along the central axis due to the mutual inductance effect are expressed as

On the other hand, if the force is calculated using the magnetic potential of Eq. (13):


and differentiating with respect to and , yields

If the two coils are parallel, we obtain


Here, the net force acting in the same direction for the entire coil is


Figure 5 shows the different forces acting on 2, which are analyzed to obtain 1 and 2. Because the forces act on the entire 2 and the unit vectors are , is expressed as 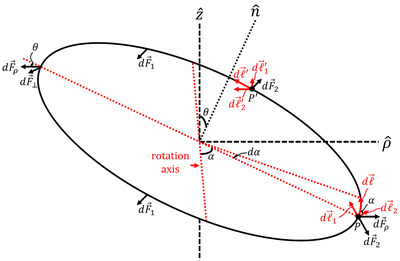 Figure 5. (Color online) Force acting on the circular coil 2 through which the current flows.


As shown in the figure, the second term in Eq. (53), i.e., the current length elements and at the two points and , is the opposite. Thus, the net magnetic forces generated by the current length elements cancel each other via the symmetry of the coil. Therefore, according to Eq. (53), the first term related to and in the same direction contributes to the magnetic force.


The torque along the rotation axis is twice the product of the force () perpendicular to the plane 2 and the distance from the current length element to the rotation axis. Therefore, we obtain


As a result, the net torque acting on the entire 2 is

Because is small in all the equations for and obtained so far, experimentally measuring and is challenging, except if and are extremely large. In the and measurement experiment, and must be enlarged so that one of the coils can use a magnet or solenoid. When using a magnet or solenoid, the formula of the magnetic field in and must be changed via integration of Eqs. (34) and (48). The results of and calculated by changing the equation of the magnetic field and considering the magnetic flux based on the coil size, as well as experimentally measured and are reported subsequently.