The perovskite manganese oxides with the general formula of R1−AMnO3 where R is typically a trivalent rare earth (R = La, Pr, Sm, ...) and A is a divalent alkaline (A = Ca, Sr, Ba) exhibit rich phase diagrams as a result of interactions among the charge, spin, orbital, and lattice degrees of freedom of Mn 3d electrons. La1−CaMnO3 is famous because for a broad range of doping, these materials have a paramagnetic to ferromagnetic transition upon cooling, which is accompanied by a sharp drop in the resistivity. The behavior is usually explained with double exchange (DE) theory based on exchange of electrons between Mn3+ and Mn4+ ions. When DE interaction wins over super exchange and thus, ferromagnetic metallic phase prevails, the colossal magnetoresistance (CMR) is observed [1–5].

Among the phases observed in La1−CaMnO3 manganites phase diagram, La0.7Ca0.3MnO3 (LCMO) is a ferromagnetic metal with mixed valence state of and configurations and CaMnO3 (CMO) is an antiferromagnetic insulator with configurations. An interesting situation is when a ferromagnetic metallic LCMO interfaces with CMO, which is an effective vacuum to the electrons in LCMO. The electrons in LCMO are expected to be delocalized across the interface within a certain length scale [3–7].

In this work, we characterize a heterostructure composed of a thin layer CMO with thickness t sandwiched by top and bottom LCMO layers. In particular, we focus on the optimization of sample synthesis and the characterization of crystallinity, surface morphology and electrical transport of the LCMO/CMO/LCMO heterostructures.

The La0.7Ca0.3MnO3 and CaMnO3 targets were prepared by standard solid state reaction. First, the pure La2O3, CaCO3 and MnO2 powder were calcined at 1000 °C for 6 hours in air. Next, they were ground in an agate mortar for thorough mixing before pressing this mixture into a round pellet with diameter of 2 cm by using a pressing die. Then, the pellets were calcined in air inside furnace. The process of mixing and calcinations were repeated several times. Finally, the pellets were sintered in air at 1350 °C for 24 hours. High density of pellets is necessary to minimize formation of particulates during deposition. Prior to deposition, the SrTiO3 (STO) (001) substrate (0.25 × 0.25 cm from Crystec) were cleaned twice in acetone and twice in ethanol to remove dust or any other greasy contaminants. Then, substrates were glued on substrate holders with silver paste to ensure good thermal contact.

A KrF excimer laser with wavelength of = 248 nm was used to irradiate the targets with repetition rate of 2 Hz. After stabilization of pressure (background pressure – 10−6 Torr), temperature and laser power for about 15 minutes, the target was ablated for several minutes to remove all the contaminants on the target surface and then, deposition starts.

XRR and XRD results of heterostructures was carried out using synchrotron radiation in Pohang Light Source. The morphology of our samples was measured by the AFM technique Here, we used the contact mode. RT curves were measured using Van der Pauw method. In order to use this method, the size of sample with 2.5 × 2.5 mm was contacted by four copper wires at the edges of sample by silver paste. Here, current flow along one edge of the sample and the voltage across opposite edge is measured.

1. The surface morphology of heterostructures

2. The structural characterization of thin films

The XRR results of heterostructures is shown in Fig.2. The film thickness of the CMO30 and LCMO30 samples are determined to be 30.1 nm and 15.4 nm by extracting from fitting data. The XRD pattern is shown in Fig.3, the LCMO peak in single layer is located at lower angles than the CMO peak, which indicate the out of plane lattice constant of LCMO layer higher than that of CMO layer. Compared to the single LCMO and CMO layers, the position of the film peaks shifts to the higher angles when the thickness of the middle CMO layer is increased. This confirms that the CMO layer in the middle is tensilely strained by the top and bottom LCMO layers and its unit cell elongates along the a- direction by elastic deformation. The Kiessig fringes in the heterostructures are more complex than in the single layer because the heterostructure films have two more interfaces. Judging from AFM, XRR, and XRD data, all the samples are comparable quality in terms of surface smoothness and crystallinity. 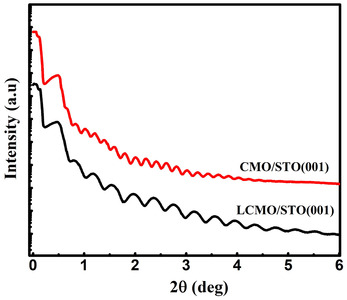 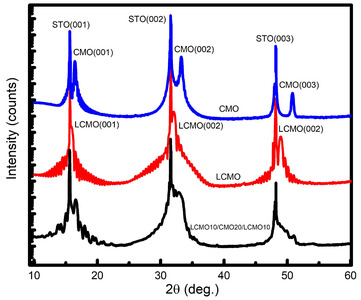 3. The resistivity of thin films

We measured the sheet resistance as a function of temperature (RT) of single CMO, LCMO, and heterostructures by using Van der Pauw method. Temperaturedependent resistivity of the CMO thin film is shown in Fig. 4a, which shows the expected insulating behavior. On the other hand, the LCMO thin films in Fig. 4b exhibit the metallic and insulating behaviors at low and high temperatures, respectively.

Then, we prepared LCMO/CMO/LCMO heterostructures while deposition time of the middle CMO layer are changed from 5 mins to 30 mins while keeping the deposition time of bottom and top LCMO to be 10 mins. The RT result is shown in Fig.4c for the film with middle CMO20 layer deposited for 20 mins. This heterostructure shows metallic behavior from 2 K to 25 K and insulating behavior at higher temperatures. This heterostructure shows an insulator-metal transition around 30 K – 70 K. This reduced insulator-metal transition temperature is related to the increased localization tendency of the electrons due to the influence of the middle CMO layer. As the quality of CMO and LCMO in single-layer and heterostructure samples is similar, the change of the RT curve is attributed to heterostructuring.

This research was supported in part by the Daegu University Research Funds.