Effects of Pr Concentration and Annealing Temperature on the Structural and Optical Properties of Y2O3:Pr3+Nanopowders by High-energy Ball-milling

Pr3+-doped Y2O3 powders were synthesized using high-energy ball milling. Their structural and photoluminescence properties were investigated as functions of the concentration of the praseodymium and the annealing temperatures. The X-ray diffraction peaks of the Y2O3:Pr3+ powders matched the standard X-ray diffraction(XRD) peaks of the cubic Y2O3 phase without impurities well. The intensity of the XRD peak increased with increasing annealing temperature, as did the photoluminescence emission intensity. These results indicate that the crystallinity of the powder improved with increasng annealing temperature. The highest PL emission intensity was observed at an annealing temperature of 1200 ◦C and Pr3+ concentration of 0.1 mol%. The PL spectra showed characteristic peaks at 618 (3P0 → 3H6), 630 (2D1 → 3H4), 644 (3P0 → 3F2), and 509 nm (3P0 → 3H5) at an excitation wavelength of 285 nm.

Phosphor-converted white-light-emitting diodes (pc-WLEDs) have been of great interest for the nextgeneration lighting technology considering their potential to reduce the electricity consumption of conventional lighting sources [1–3]. Furthermore, pc-WLEDs exhibit large lifetimes, robustness, high luminous efficacies, and environment-friendly characteristics [4–6]. The most common method for the fabrication of pc-WLEDs is based on the blue emitting LED chips and combined with yellow light (red and green emitting phosphors). However, because the red-light component is not sufficient, the commercial pc-WLEDs exhibit low color rendering index (CRI) values [7,8], which hinders their applications. The performances of pc-WLEDs are dependent on the luminescence properties of the used phosphorus. Thus, advanced pc-WLEDs require improved quantum yield and thermal stability.

Among the oxide materials, yttrium oxide (Y2O3) has been extensively studied owing to its high thermal conductivity, good physical and chemical stabilities, high transparency in the ultraviolet to mid-infrared ranges, and low phonon energy [9–11]. Among the various rare-earth ions, praseodymium (Pr3+)-doped materials are of interest, because Pr3+ ions have an energy level diagram containing several multiplets. This imply that Pr3+-doped materials can emit light simultaneous blue, green, and red emissions depending on the hosts [12,13]. Therefore, Pr3+-doped materials can be used as luminescent materials for WLEDs, scintillators, and three-dimensional (3D) visual displays [14–16]. Over the past few years, the syntheses and structural and luminescent properties of Pr3+-doped phosphors such as CaTiO3:Pr3+, LaBMO6:Pr3+ (M = W, Mo), and Sr2Ge2O4:Pr3+ have been investigated [17–19]. Alarcon-Flores . elucidated the structural and luminescent characteristics of Pr3+-doped Y2O3 powders using the solvent evaporation method [20].

The structure of synthesized samples was characterized by X-ray diffraction (XRD) (PANalytical, X’pert PRO MPD) with Cu K ( = 1.54060 Å) radiation in the 2 measurement rage of 5 – 65° in scanning rate of 0.03°/s. The acceleration voltage and current were 40 kV and 30 mA, respectively. The morphology of the sample was observed by field-emission scanning electron microscopy (FE-SEM, S-4800 Hitachi) at an acceleration voltage of 15.0 kV. Raman spectra were acquired using an XperRam F1.4 system (Nanobase Inc., Seoul, Korea) equipped with a 785-nm diode laser source. The laser power incident on the sample surface was 6.2 mW. The spectra were recorded by scanning the 100-2800 cm-1 region, which was accumulated for 10 scans with a 5s acquisition time. The photoluminescence excitation (PLE) and emission (PL) spectra were measured using an FL 6500 fluorescence spectrometer (Perkin-Elmer Inc., Waltham, USA) at room temperature.

Figure 1(a) presents XRD patterns of the Pr3+-doped Y2O3 powders for different doping levels (0.1, 0.5, and 1 mol%) for a milling time of 300 min, annealing temperature of 1200 °C, and annealing time of 1 h. A good match with the standard XRD peaks of the cubic Y2O3 phase (Inorganic Crystal Structure Database (ICSD) card #086817) plotted at the bottom of the diagram was obtained, without impurity peaks. The absence of secondary phases confirmed the efficacy of the synthesis in transferring the Pr3+ ions into the Y2O3 matrix in the entire range of Y3+ substitution levels. The 2 values were 29.2, 33.9, 48.7, and 57.8°, corresponding to the (222), (400), (440), and (622) planes, respectively. The increase in Pr content shifted the main diffraction peak of the (222) plane at approximately 2 ~ 29.2° toward smaller angles (Fig. 1(b)), and the lattice constant increased (Fig. 1(c)), which suggests lattice expansion. These phenomena can be attributed to the replacement of Y3+ ions with a smaller ionic radius ( = 0.90 Å) by Pr3+ ions with a larger ionic radius ( = 1.13 Å) in the Y2O3 matrix. These results are consistent with previous researches [23–26]. Figure 1(d) presents the XRD patterns of the 0.1-mol%-Pr3+-doped Y2O3 powders annealed at different temperatures for 1 h. The XRD spectra of these samples also agreed with the standard data of the cubic phase of the Y2O3 powders. The XRD peaks increased and broadening of peaks decreased with increasing annealing temperature. This indicate that the crystallinity of the powder is improved. As the annealing temperature increases, the characteristic (220) diffraction peak around 2 ~ 29.2° slightly shifted toward larger angles (Fig. 1(e)) and the lattice constant decreased (Fig. 1(f)). This behavior suggests lattice contraction. Y2O3:Pr3+ structure may typically have a number of defects such as oxygen vacancies, lattice disorders, etc. As a result of annealing these defects are removed and the lattice contracts. 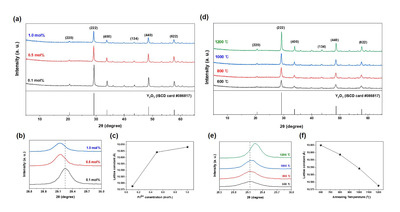 Figure 2(a)–(d) present SEM images of the 0.1-mol%-Pr3+-doped Y2O3 powders fabricated at the different annealing temperatures (600, 800, 1000, and 1200 ℃). At 600 °C, the SEM image of the sample shows irregular microstructures with fairly small highly agglomerated grains. It can be seen that the shapes of the particles became clearer with obvious facets and round edges with increasing annealing temperature. The particle size of the Pr3+-doped Y2O3 powder increased from 50 to 110 nm with the increase in the annealing temperature from 600 to 1200 ℃. During the annealing, individual nanostructures mixed and coalesced with one another, yielding larger particles. An elemental energy-dispersive spectroscopy (EDS) analysis of the Pr3+-doped Y2O3 powders is shown in Fig. 2(e). The EDS spectrum confirms the existence of Y, O, and Pr in good agreement with the initial elements.

To further investigate the crystal structures of the Pr3+-doped Y2O3 powders, we measured the Raman spectra of the samples. Raman spectroscopy can be used to characterize the phonon energies of materials. Figure 3(a) and (b) show the Raman spectra of the Pr3+-doped Y2O3 powders with different doping contents of Pr3+ (0.1, 0.5, and 1 mol%) fabricated at different annealing temperatures (600, 800, 1000, and 1200 °C) in the range of 100–2800 cm-1. In addition, the Raman spectrum of a pure Y2O3 powder is shown in Fig. 3(c). As shown in Fig. 3, no significant differences are observed between the Raman spectra of the pure Y2O3 powder and Pr3+-doped Y2O3 powders, which implies that the introduction of Pr3+ may not lead to additional modes. In the range of 100–500 cm-1, the major peak assigned to the + mode is observed at 375 cm-1 originated from the Y3+–O2- vibration [27–29]. The intensity of the Raman peak decreased with increasing the Pr3+ concentration. This result is consistent with the XRD results for the Y2O3:Pr3+ powders with different doping contents of Pr3+. As the annealing temperature increased, the Raman bands became more intense and sharper. It is likely that better and larger crystallites are produced in the host material with the increase in the annealing temperature. Therefore, a better arrangement of the Pr3+ ions at the crystallographic sites of the Y2O3 cubic lattice is achieved. This is also supported by the XRD results.

The photoluminescence efficiencies of rare-earth phosphor materials can be enhanced by the doping concentration and annealing temperature. Thus, it is important to determine the optimal dopant concentration and annealing temperature. Figure 4(a) and (b) present the PLE and PL spectra of the Y2O3:Pr3+ powders as a function of the Pr3+ doping concentration, respectively. The PLE spectra contain an intense excitation band at 285 nm at an emission wavelength of 630 nm. This implies that the Pr3+-doped Y2O3 powders can be used as red-emission phosphors in WLEDs based on ultraviolet or blue-lightemitting diode chips. The inset of Fig. 4(b) presents photoluminescence photographs of the Pr3+-doped Y2O3 powders for different doping levels (0.1, 0.5, and 1.0 mol%) annealed at 1200 °C under a 365-nm ultraviolet lamp radiation. The 0.1-mol%-Pr3+-doped Y2O3 powder exhibited a stronger fluorescence than those at 0.5 and 1 mol%. The PL spectra showed the characteristic peaks at 618 (30 → 36), 630 (21 → 34), 644 (30 → 32), and 509 nm (30 → 35) at an excitation wavelength of 285 nm, which is in good agreement with the literature [30, 31]. Compared to other emission transitions from the 30 excited state, the emission transition starts 12 state shows high intensity. Because the 30 state is relaxed non-radiatively to the 2D1 state via the deep lying 4f5d level, and quenches the emission from the 30 manifolds [32]. An energy level diagram of the Pr3+ ion is shown in Fig. 5 [33]. The intensities of the emission bands decreased with increasing the Pr3+ concentration. This result is attributed to concentration quenching, caused by the increase in the ion–ion interaction triggered by the smaller distance between the interacting activators with the increase in concentration [34, 35]. Therefore, the PL intensities decreased with increasing the Pr concentration. The maximum PL intensity of the Y2O3:Pr3+ powders was obtained at an annealing temperature of 1200 °C, annealing time of 1 h, and Pr3+ doping concentration of 0.1 mol%. 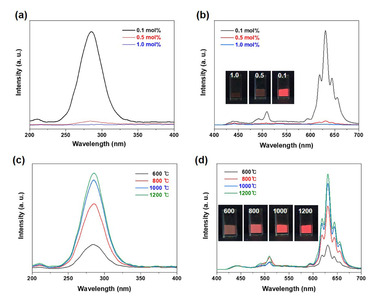 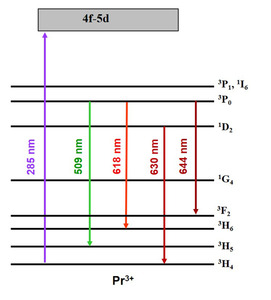 Figure 4(c) and (d) present the PLE and PL spectra of the 0.1-mol%-Pr3+-doped Y2O3 powders as a function of the annealing temperature, respectively. The inset of Fig. 4(d) presents luminescence photographs of the 0.1-mol%-Pr3+-doped Y2O3 powders at different annealing temperatures (600, 800, 1000, and 1200 °C) under the 365-nm ultraviolet lamp radiation. The fluorescence of the Pr3+-doped Y2O3 powder was enhanced with the increase in the annealing temperature. The PLE spectrum monitored at 630 nm exhibited a broad band centered at 285 nm. The PL spectrum consisted of a strong red peak at 630 nm and very weak green peak at 509 nm at an excitation wavelength of 285 nm. The PL emission intensity increased with the annealing temperature owing to the increased crystallinity, which is proved by the XRD results. Therefore, the Pr3+ ions were sufficiently dispersed at the crystallographic sites in the Y2O3 cubic lattice. The PL intensity of the Y2O3:Pr3+ sample annealed at 1200 °C at 630 nm was approximately 3.8 times that of the sample annealed at 600 °C (Fig. 4(d)).

This study was supported by the 2018 Research Fund from Chosun University.