Out-of-plane Magnetic Anisotropy in Cleaved and Uncleaved CoS2

Magnetic anisotropy is an important phenomenon driven by a strong electron correlation. It is defined as the magnetization tendency of magnetic material in a particular crystallographic direction. In this paper, we investigated the magnetic anisotropy of CoS2 single crystal. Here, torque magnetometry was used to determine the magnetocrystalline anisotropy of the crystal. The angle dependence of torque τ(θ) for CoS2 was measured at several temperatures above and below the ferromagnetic order transition Tc. To verify the effect of surface morphology on magnetic properties, we compared the τ(θ) of uncleaved and cleaved pure CoS2. Results show that two-fold symmetry was equally dominant in both. Furthermore, we compared higher orders of magnetic anisotropy to track the intrinsic and shape anisotropies. All amplitudes showed the same behavior for cleaved and uncleaved samples, but the higher orders were more dominatant in the cleaved sample.

Magnetic anisotropy is an important phenomenon driven by a strong electron correlation. It is a factor that influences the magnetization tendency of materials, implying the dependency of magnetic properties on the direction of the applied field [1-4]. Magnetic anisotropy can be classified into crystal (magnetocrystalline), shape, and exchange anisotropies. Additionally, external factors such as annealing and irradiation can create anisotropy. Crystal anisotropy is a force that maintains the magnetization in a specific crystallographic direction, known as the easy direction of magnetization, and consequently regulates the magnetization strength. Applying the magnetic field in an easy direction of ferromagnet requires only a few tens of Oersteds to achieve saturation. However, when the field is applied in a hard axis direction, the domain movement structure changes and domain rotation occurs in the high field instead[5]. Anisotropic interactions heavily depend on the crystal morphology, symmetry, and content of the magnetic substance. Furthermore, robust magnetic anisotropy dependence on crystal cleavage has been reported[6].

CoS2 belongs to ferromagnetic materials with a cubic pyrite structure, with its ferromagnetic transition temperature at 122 K. It is classified into the space group, where the cations(Co) are enclosed by six anions (S), forming a trigonal distorted octahedron[7]. The d-electron level in the transition metal disulfides is split by the octahedral crystal field into and orbitals. Due to the trigonal distortion, the orbital splits further into and levels. Sulfur atoms have a robust covalent bond[8]. However, the cobalt-sulfur bond is ionic, primarily with a crucial covalent bond present. This covalent bond between Co and S 3p orbitals triggers the formation of the narrow band ferromagnet. Conversely, the antibonding S 3p* has the cobalt d feature represented by , which is sufficiently narrow to facilitate magnetic ordering. The electrical and magnetic properties of the transition metal disulfides originate from the filling of the antibonding band . Thus, CoS2 exhibits metallic ferromagnetism connected with the unpaired spin of the d6d1 levels[9]. Therefore, CoS2 is a half-metallic ferromagnet with high spin polarization as the exchange splitting induces a decrease in the minority spins at the Fermi level[10-13]. Although CoS2 magnetic anisotropy has been investigated only once, it was concluded that it is responsive to sample shape [14].

In our study, we verified out-of-plane (OOP) magnetic anisotropy before and after the ferromagnetic transition of cleaved and uncleaved CoS2 single crystals. Furthermore, higher-order anisotropic contributions have been evaluated and compared for both cases. Results show that compared with the uncleaved sample, the cleavage sample showed a larger higher-order anisotropic constant and a significant contribution to the torque signal.

The crystal structure of CoS2 has a cubic structure with cut corners a cross-section, as shown in the inset of Fig. 4(b). The length of each side is approximately 1 mm. To verify the effect of surface morphology on magnetic properties, we compared the torque signal of uncleaved and cleaved CoS2. Cleaved CoS2 was prepared by parallelly cutting the crystal plane with a razor. The thickness is about 0.3 mm, and the shape of the shortened cross-section is shown in the inset of Fig. 2(b). Torque measurement for CoS2single crystal was performed using the membrane-type surface stress (MSS) device[15]. CoS2 was mounted on the MSS using vacuum grease by aligning the crystal direction. Moreover, the torque change was measured through the change in the resistance of the piezo material comprising a Wheatstone bridge circuit. This is a non-destructive and reliable technique for detecting spin alignment. Here, the magnetic field direction with respect to the crystal axis was controlled using a rotator. We measured the OOP torque while rotating the field through angle , with respect to the -axis. The rotating angle is defined as the angle between the applied field and c-axis of the crystal (Fig. 1(a) (Inset)). 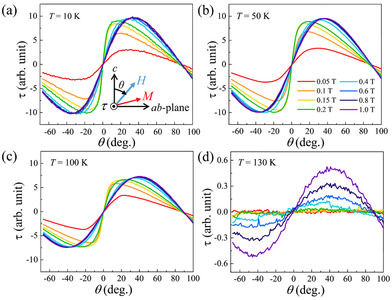 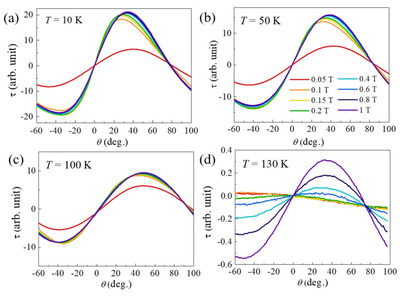 Figure 2. (Color online) () for uncleaved CoS2 at different magnetic fields and temperatures above and below . 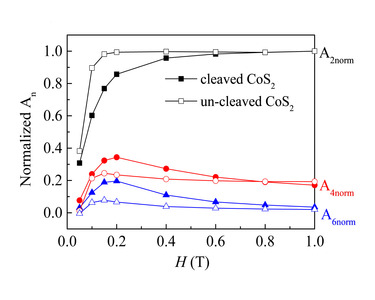 Figure 4. (Color online) (a) Normalized amplitude /2(1 T) versus magnetic field at = 10 K solid symbols for cleaved CoS2 and open symbols for uncleaved CoS2.

We performed the angle-dependent torque () at diverse magnetic fields and temperature . Figure 1 shows the torque curvature for cleaved CoS2 after removing the background. Data consistency was confirmed with other cleaved samples and no change was observed. All data exhibited two-fold symmetry and torque values decreased as T increased. At low temperatures below , the sawtooth-like curve occurred at approximately 0.05 - 0.2 T. Meanwhile, the saturation field of ferromagnetic CoS2 is approximately 0.2 T, and a sine wave appeared in a larger field. The sawtooth pattern at low fields steadily transforms into a sinusoidal pattern as H rises. By applying a high magnetic field, we overcome all magnetic correlations, to restore the sinusoidal pattern due to the contribution of the Zeeman energy. The maximum amplitude shifts with the field strength until it overlaps in a high field. Conversely, at = 130 K above , no signal was observed at very low fields and a very small signal was detected at higher fields.

Since CoS2 has a cubic crystal structure, the rotating plane on which changes includes two main principal crystal directions. Considering the symmetry of the crystal, odd coefficients corresponding to 3, 5...[16,17]. So, () has a sin 2n angular dependence and can be fitted with higher coefficients only. Accordingly, () was fitted using the following equation:

Based on the fitted curves, the amplitudes of the higher-order corrections were extracted. The behavior pattern with and is displayed in Figs. 2(b) and (c), respectively. The all symmetry fold increases with the field up to 0.2 T, then it saturates or gradually reduces. The two-fold symmetry is more predominant than the four- and six-fold symmetries. The temperature dependence of the amplitude diminishes for all 2, 4, and 6 beyond .

To validate the surface shape influence of the crystal on their characteristics[18], an uncleaved CoS2 single crystal was measured via the same procedure. () was measured at the same fields () and temperatures () as cleaved samples. Figure 3 presents the normalized torque curvatures. Generally, two-fold constituents for curves remain unchanged, which is the same case for the maximum values of torque. It keeps decreasing as the increases toward 300 K. Contrary to the cleaved samples, data at low temperatures below , a sawtooth pattern at low field vanishs. All peak positions are similar, except for a 0.1 T low-magnetic field. At = 130 K, the amplitude decreases rapidly, but no significant transformation occurs. 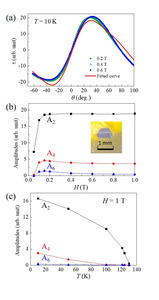 Figure 4(a) illustrates the fitted torque curves for the uncleaved CoS2. The fitting curve fits reasonably well for all and , but it is not perfect. The behavior pattern with the and of the extracted values of , and are presented in Figs. 4(b) and (c). All symmetry fold increases with the field below 0.2 T, then saturates. Furthermore, the two-fold symmetry is predominant. is very small, 4 is quickly suppressed as the temperature increases, and all s diminish at .

This research was supported by Kyungpook National University Research Fund, 2019